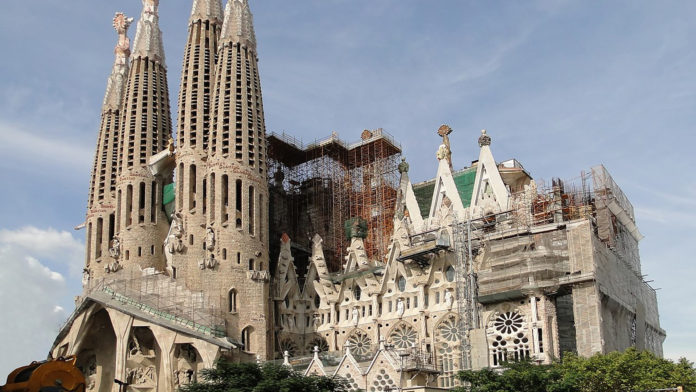 As one of Barcelona’s most iconic destinations, La Sagrada Familia welcomes roughly 4 million visitors each year. Tourists often find themselves marveling at the church, though they have yet to see it in its full glory since Sagrada Familia is still under construction. The architectural wonder, which was designed by Spanish architect Antoni Gaudi, is expected to be primarily completed by 2026 if all goes well. By then, Sagrada Familia will have taken longer to finish than the Pyramids of Giza and the Taj Mahal.

When the idea of putting up a temple honoring the holy family first came to be, Gaudi was not the original architect called on to do the plans. Francisco de Paula del Villar y Lozano was serving as the official architect of the Roman Catholic Archdiocese of Barcelona at that time, so he was the foremost choice for Sagrada Familia. Del Villar’s original vision for the church followed a Neo-Gothic style of architecture. However, his disagreements with the philanthropist who was responsible for the project’s funding led to the loss of his job. Sagrada Familia then fell into the hands of Gaudi, who took a different approach to the church’s design compared to his predecessor.

Gaudi devoted the last years of his life entirely to Sagrada Familia’s construction. Unfortunately, he passed away in 1926 after succumbing to injuries caused by being hit by a tram. By then, only one of the church’s bell towers had been finished. Thankfully, Gaudi has the foresight to know that his masterpiece may not even be finished in his lifetime. His plans were drawn in such a way that the architects who succeeded him could easily understand it and even add to the design. Gaudi also planned for the construction to be completed in stages. This proved to be advantageous in the long run as several architects took up the mantle he left behind and worked to ensure Sagrada Familia’s completion.

After Gaudi’s tragic death, progress on the church was at a stop-and-go momentum. Many key events like the Spanish Civil War and diminishing of funds from private donors significantly affected the pacing of construction. Things would turn out for the better at the start of the 21st century when tourists surged into Europe. Albeit unfinished, the Sagrada Familia drew flocks of tourists who were willing to pay to explore the church’s wonders. This development left the foundation overseeing the church’s construction with the money needed to continuously move forward with construction. In 2010, Pope Benedict XVI consecrated the newly finished main nave of the Sagrada Familia.

Apart from additional funding, finding the right mix of traditional artisanship and technological advancements has also played a key role in speeding up Sagrada Familia’s construction to meet the 2026 deadline. Around 400 panels of granite and steel needed for the church’s roof and remaining towers have already been accomplished with the use of motorized cranes. Computers also help in cutting blocks as precisely as possible, but workers are still needed to chisel the texture by hand. Large-scale work occurs off-site at Galera while masonry and carpentry for smaller decorative elements is done on the grounds of Sagrada Familia itself.

Come 2026, Sagrada Familia will not be entirely finished — based on Gaudi’s original plans at least. The architect also intended for a large portico connected to a grand staircase leading outward to a surrounding garden to be built. However, urban developments in the immediate area have cast doubts on whether or not these will still be integrated into the church’s construction. As of now, the decision remains on the table as the government, architects, and citizens affected by the construction weigh the potential consequences of pursuing either course of action.

The detailing of the facade of Eternal Glory is also expected to be done during the second phase of construction. Gaudi had left the facade’s design up to his successors, who are still trying to determine what elements would best embody Gaudi’s vision, given his preference for integrating nature into this work.

Regardless, one cannot deny that Sagrada Familia will be more of a wonder to behold when the scaffolding is finally cleared and the Jesus tower—its tallest—is finally topped with an illuminated cross. 2026 will mark the 100th anniversary of Gaudi’s death but it will also celebrate the true unveiling of his masterpiece to the world.