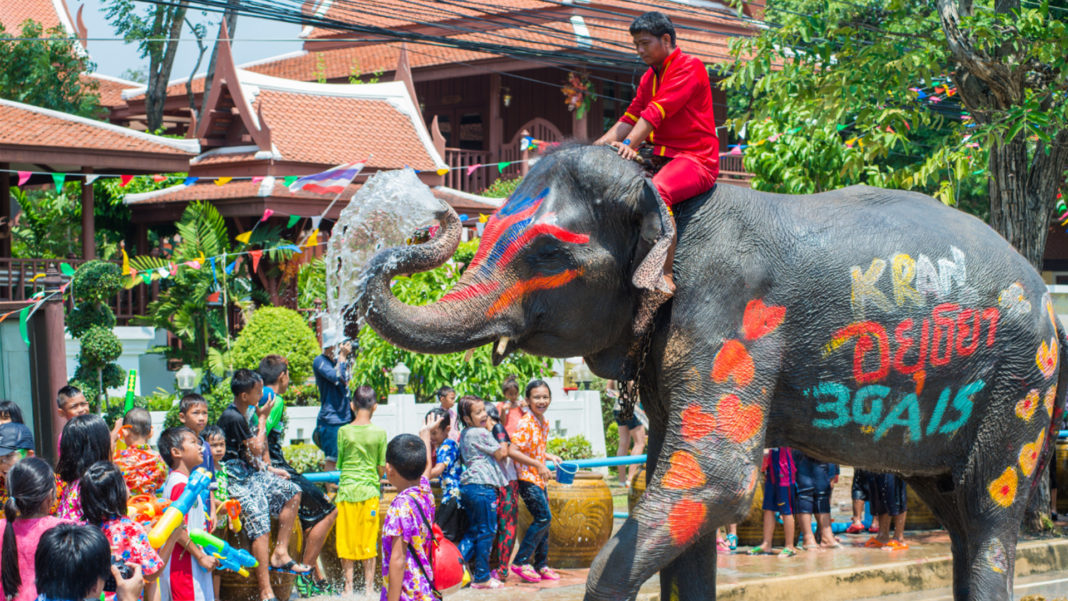 Did you miss water gun fighting during your childhood days? Water is a big part of our childhood life and so as the life of the people in Thailand as it has one of the wildest and most notorious water fight celebration in the world.

Posted by Tourism Authority of Thailand – The Philippines Branch Office on Thursday, April 14, 2016

While majority is celebrating New Year every first of January, April marks the new era of the Buddhist calendar where 90% of Thailand’s population adheres to Theravada Buddhism, the official religion of the country.

Originated from the Sanskrit word “saṃkrānti” which means “astrological passage or approach”, Songkran festival celebrates the passage of the sun from one Zodiac sign to another where among the twelve Songkrans, the entering of the sun to the sign of Aries the Ram is considered the most significant one.

During the past decades, the traditional Songkran practice would originally take place by going to a temple and pouring a fragranced water on the statues of Buddha. They would also have the high Buddhist monk pour water on their shoulders. However, due to the absence of the monk and those Thai who wish to practice the tradition but isn’t located to a nearby temple, the pouring of water to each other has been the practice instead.

As it is based on astrological calculations, the date of the Songkran festival varies every year. But, it was then fixed on April 13 which runs for three days. But because people enjoys it so much, it sometimes stretches the celebration up o six to seven long days. Songkran Festival is celebrated across Thailand and it has since then considered as a holiday spent with families, friends and for annual house and spirit cleaning. Traditionally, the first day of Songkran is celebrated through Rod Nam Dum Hua ritual where young people would pour scented water into the palms of the elderly as a sign of respect, humility and ask for their blessings. The first day of the festival is officially known as the “National Elderly Day.”

"SONGKRAN WATER FESTIVAL THAILAND IN ROME 2017"Celebration for the Thai New Year with the big Thai community in Rome,…

The day after is officially called as the “National Family Day” where families would wake up early to give alms to the monks and spent the rest of the day with their families. But it wouldn’t be called the Thai Water Festival for no reason, Songkran’s main highlight is actually the water.

Songkran Festival starts tomorrow! Are you ready for this? You better be!https://www.phuket101.net/songkran-phuket/

In contrast to some misconceptions about certain festivities like this, throwing water isn’t only practiced just for the sake of a “fun exciting experience.” Traditionally, water symbolizes ‘cleansing or purification.’ Back then, people just pour water to each other, but as time passed by, they took it to the next level by using buckets of water, water guns, garden hose and even elephants to which Thailand is known for.

Nowadays, you would witness people splashing water to each other, where strangers are no exception. Thai’s would roam around the streets to engage themselves into the wildest ‘water fight’ using containers, water guns and hoses accompanied rarely by powdered chalk which symbolizes the blessings of the monks. And let’s not forget the center of the tradition where people carries the Buddha to a long procession and pour water to it to wash away the misfortunes and hope for good luck and good new chapter of their lives.

Also, it’s this time of the year where water proof or water resistance gadgets and protection for gadgets are mostly at height.

Although Chiang Mia, Thailand holds the grandest Songkran festival, it is also celebrated across the country and other regions of Asia such as Southern China, Myanmar, Laos and Cambodia. Over the years, the Songkran festival has evolved into the longest and largest water festival in the country. Getting wet wouldn’t actually hurt during the hottest month of the year, right?