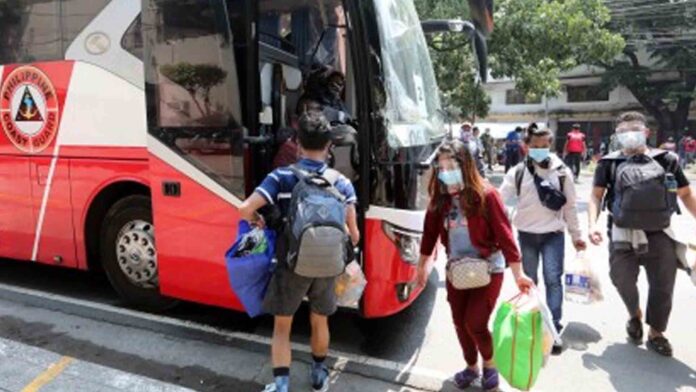 Encabo, lead convenor of the Hatid Tulong program, said the government is already preparing for the resumption of the send-off activities.

The program earlier drew criticism over supposed lack of physical distancing after stranded individuals flocked to the Rizal Memorial Sports Complex on July 25 to 26.

To avoid the same scenario, Encabo said the government has developed a new approach in sending home LSIs.

The government will assist the LSIs through a clustering system, he said, wherein only a pocketed group of stranded people will be served at a time, in a bid to avoid crowds within serving areas.

Encabo assured that they will implement the program by strictly following containment measures to further prevent the local transmission of the coronavirus disease 2019 (Covid-19) among beneficiaries and facilitators.

“During the second grand send-off, the HTI secretariat coordinated with LSIs for the scheduled trips. Those who confirmed were pre-registered and were able to go home to their provinces after passing medical health requirements of DOH,” Encabo explained.

“However, there were walk-ins who went to Rizal Stadium hoping to avail of the free transportation arranged by Hatid Tulong, but were unable to go home because their destinations were under a moratorium,” he added.

Encabo said they will prioritize those who have not been able to avail of the trips during the second grand send-off of the Hatid Tulong program including “those who were not medically fit to travel at that time.”

While LSIs are waiting for their turn in the government-sponsored trips, Encabo said the government has temporarily housed them at various “Heal as one center” health facilities that were built to accommodate Covid-19 patients, complete with equipment and amenities.

Encabo said the government has already scheduled the travels per region.

He added that the government is now starting to organize the scheduling of the pocketed send-offs going to Mindanao, Visayas, Region 5 (Bicol) and other parts of Luzon and further assured the public that it will be compliant to the Inter-Agency Task Force for the Management of Emerging Infectious Diseases (IATF)’s travel guidelines and medical protocols.

The government expects the Hatid Tulong Initiative to be completed by October 19, he added.

On the other hand, Encabo said some private groups have already volunteered to partake in the government’s initiative by helping them in the maintenance of temporary housing facilities offered for the LSIs, as well as providing them food packs and hygiene kits during their stay.

Apart from the efforts of various national government agencies, he said various corporations, NGOs, and other socio-civic organizations have also been donating and providing services for free to the LSIs.

This makes the program a whole-of-nation approach, he said.

As the government boosted efforts to assist LSIs amid the pandemic, Encabo reported that some 131,886 LSIs were “successfully dispatched” to their respective provinces since May 26. (PNA)