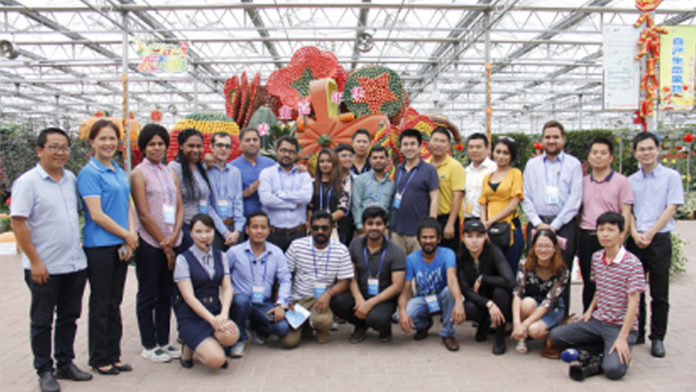 Some 45 foreign journalists from over 20 countries around the world participated in a three-day Overseas Media Tour organized by the Guangxi Zhuang Autonomous Region and the People’s Daily Online in the capital city, Nanning, on June 25.

The foreign journalists, who were divided into four groups, explored the wonderful landscape of the area, visited local industries and observed the government’s poverty alleviation program in action among the 14 various cities of the province.

“Guangxi does not only boast beautiful and unique sceneries, but also a very distinctive cultural environment alongside development opportunities,” said Fan Xiaoli, Head of the Publicity Department of the CPC Guangxi Committee.

On the other hand, Lui Huaxin, President of People’s Daily of Guangxi Branch, views the role of the province as a significant gateway to the Belt and Road Initiative of southern China to the world.

“Guangxi is not only about the sea and rivers, but also building itself into an international passage, using a new strategic method for opening up trade in Southern China as an important gateway to the Belt and Road,” Lui said.

The event also celebrated the 60th Anniversary of the Founding of Guangxi Zhuang Autonomous Region.

Guangxi is situated in southwest China and possesses a coastline of 1,595 kilometers, which makes it one of China’s most suitable passages to the sea.

It has more than 50 million population with 12 native ethnic groups, including the Zhuang population as the largest minority group in China.

The prime geographical location of the province serves as the frontier and window of China’s cooperation towards the ASEAN and other countries.

A long and continuous mountain encompasses Guangxi. It has distinctive dry and summer seasons with occasional cold winter.

Guangxi is one of the main battlefields of poverty alleviation in China.

According to the data obtained by the Bureau of Statistics of the Autonomous region, in terms of the latest rural poverty standards, there were a total of 2.46 million poor people in the rural area by the end of 2017, in which significant portions come from ethnic minorities.

With this problem, the Guangxi party committees and the government continuously work to uplift the lives of the people particularly the ethnic minority area.

The provincial government believes that the mark of a well-off society is providing a comfortable life to locals, most especially the ethnic groups of the region.

In fact, the planning of an exhibition hall of Guangxi “Colorful Garden” paved the way to a better society in Guangxi.

The hall is divided into five parts, which include a preface hall, a colorful progress, plan, industry and future.

Lutang Community in Yudong New District, Yulin City is one of beneficiaries of the Colorful Garden area.

The residents’ production and living standards have improved significantly through the years.

Strengthening and vitalizing the city through industrial development is also one of the main targets of Guangxi.

The city of Guigang is the key leader of speedy industrial progress and social development of the province.

In 2017, the total output value of industries scaled a new height of 100 billion Chinese yuan, with the added value and industrial investment registering 12.2% and 11.6% year-on-year increase respectively.

These serve as a strong foothold, sustaining high-quality industrial development.

Based on this, the framework of Guangxi’s second automobile manufacturing base has basically taken shape.

The China-ASEAN New Energy Electric Vehicles Manufacturing Base has witnessed the settlement of 79 famous enterprises in finished autos and supporting products including Aima, CHENGLONG, Shangma, Feineng and Xinchen, of which over 40 enterprises have completed production, hence forming the electric vehicle industrial chain.

The growth rate of the newly emerging industries reached 145% and 78% in 2017 and the first quarter of 2018 respectively.

Guangxi also pays a great importance to the development of tourism, as a strategic pillar industry.

The provincial tourist market maintains a rapid growth trend and has fast-tracked its development.

According to the Data Center of the National Tourism Administration, 386 million tourists visited China during the Spring Festival holiday this year.

Guangxi ranks eighth among the 10 provinces most visited by tourists.

In the first quarter of 2018, Guangxi received a total of 140 million domestic and foreign tourists, a significant increase of 26.3 percent over the same period last year.

This year, the Guangxi Tourism Department seeks to promote new brands in a bid to turn the province into a strong tourist destination.

The Silver Beach, known as the best beach in China and the Weizhou Island, one of China’s Top 10 most beautiful islands, are both found in Beihai city.

The annual average temperature is about 22℃, and the lovely climate bestows the city with rich tropical fruits such as lichee, longan, banana, and pineapple.

Beihai is regarded as the biggest “Oxygen Bar City” with a negative oxygen ion concentration exceeding the inland city for over 10 times.

It is also a famous “migrant city” in China that many elders choose to live.

Meanwhile, the Golden Bay Mangrove Forest, with an area of over 2500 mu (nearly 167 hectares) and the 4.5km-long coastline, is also one of the best tourist spots in the southeast of Beihai.

It is comprised of three areas including a sightseeing area, a leisure and recreation area, and a beach-combing area.

It has gradually developed into an ecological tourist attraction where one can enjoy ecotourism and marine knowledge immersion.

The pace of development of Guangxi province has been moving forward, and the government vowed to remain faithful and dedicated to not only fully alleviate poverty, but also attain a good quality of economic and social development for the present and the next generation. (PNA)