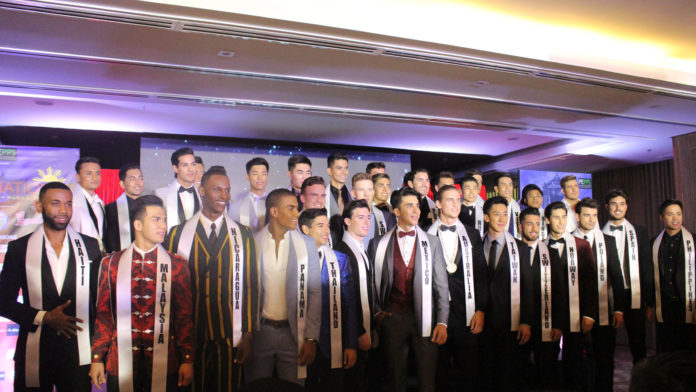 The official candidates for the 13th Mister International pageant were presented to the media on February 16, 2019 at the Hotel Benilde Maison De La Salle in Manila, Philippines.

Over thirty-nine ‘distinctively handsome’ men from all corners of the world opened the night by parading in their swimwear.

The modern men also showcased their traditional formal wear during the press presentation.

The pre-pageant event was concluded by a sashing ceremony to award the official competition sashes to the candidates.

The preparations for the event started on January and with the help of numerous partners and the Provincial Government of Ilocos Norte, the 13th edition of Mister International was made possible. “We are also looking forward to promoting the Philippines and our tourism, to help the government, and to encourage more people to visit our country.” PEPPs president, Mr. Carlo Morris Galang shared.

This year’s pre-pageant activities will also be graced by the reigning Mister International Seung Hwan Lee of South Korea. “Making a good relationship with other candidates is a very important thing and of course, just enjoying the competition.” Lee said.

The contestants for this year’s Mister International will be judged in three categories: swimwear, evening wear and interview, to vie for the coveted title.

The grand finals of the 13th Mister International pageant will be held at One Esplanade Mall of Asia Complex, Pasay City on February 24, 2018.

The official contestants for the 13th Mister International are as follows: